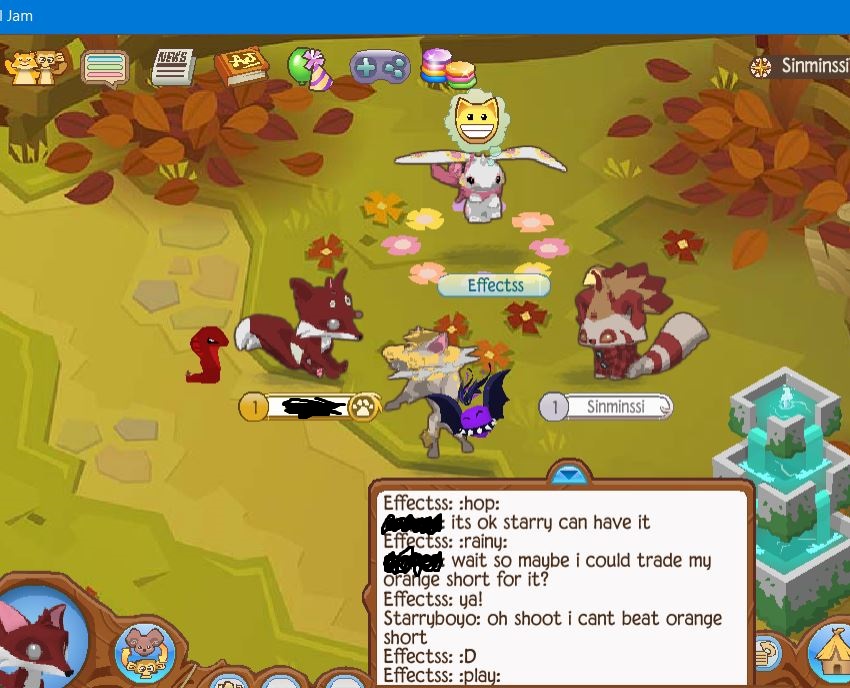 Okay here's the story: (I censored my username for security reasons)

I joined the giveaway while following a buddy of mine. There were probably around 20 people there, the first thing they were going to give away was a red long collar.

A common tactic that I've noticed is to say you're giving away a smaller prize first and that you're going to use a program to choose the winner. But actually the winner is an alternate account of yours and you just give it to them instead.

The winner in question this time was "Effectss" who supposedly got the red long collar. Next came the inevitable trust giveaway. I traded some good items then declined. Next the other two accounts traded long wristbands and supposedly accepted and traded back.

It basically went on for another 20 minutes without trading and basically trying to convince me to trade better. I eventually offered to trade an orange short collar out of boredom but didn't actually do so.

More convincing followed, I got bored again and near the end I just said "It's ok I'm done recording anyway" "I have all the information I need"

Sinminssi quickly traded Staryboyo the collar and everyone left lol

Anyway I think we can all agree Sinminssi has 3 accounts or two friends working with them to effectively scam people.

Hmm, do you have any real proof? Such as, proof any of your items were stolen or proof that they are the same person? This would be very helpful if you want a scammer page made for them.

No "Proof" they are the same person but I'd say it's highly likely since the other two never talked while one was talking. No items were stolen but it's very obvious they were trying since they were doing trust trading.

Another reason I think they the are the same person is because whenever I said I didn't want the spike they would say "are you sure?" and "You could have very good chance of getting it"

But they didn't actually scam anything? You don't have any proof they've ever scammed before, and them being the same person are just inferences. I don't believe a page can be made for them without real proof of either of these things.

Alrighty then guess I won't interfere in scammer activities anymore if it means nothing can be done to prevent it. goodbye "Scammer Watch Wiki"

That's not what I'm saying at all. I'm saying there's nothing we can do unless you have real, valid proof. For all we know you could just have a grudge against said user/s and are trying to get them banned.

This happened to me, but only 2 accounts, Kinderbunnycoco attempted to scam my long, then got on Tombay saying it was her sister and she told her never to do it again, I later found out that Kinderbunnycoco, and cocobunnypaw were Tombay's spares. Then found out that Tombay actually helped a scammer, named Poochmoo. Of course I unfriended. Be careful, watch out for any of these scammers.

Please do not post things like this without proof, because if there is no proof you could just be trying to get innocent people blocked by using your own Wiki spare accounts to convince people you are telling the truth when you could be lying.