They only hacked me when I mentioned scamming

So, In this screenshot we were actually having a really nice conversation. She was actually a lovely person until she hacked me.

I actually made a comment on tokkas page so you can go see the whole explanation there:

She is explaining to me that she had a headdress before (it faded but you can kinda see it) And I was asking if she got scammed, she claimed yes. also I have another, in it i was saying . is secretly amazed . because she said she actually had 3 longs: a black long, a yellow long and a pink long. it happened so long ago but i still remember the whole thing so vividly, it honestly scarred me 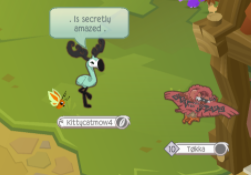 Well, there is not enough proof in the screenshots. So we have to get more proof. Sorry. But if she's proven to be a scammer with more proof then we might make a page to warn others! Thank you though for these images.

No problem. If you get anymore proof please give it to a staff member.

Ok, next time i see her on i will use a spare and record it

Oof, sorry if this is reviving a dead thread but I've just realized she probably couldn't hack my account because it is random numbers and letters. My sisters, however was something super easy, and so was my friends. sooooo, what if i try with a spare were the password is literally the first few letters of the alphabet?

Hmm, go ahead. If you find some good proof please give it to us.