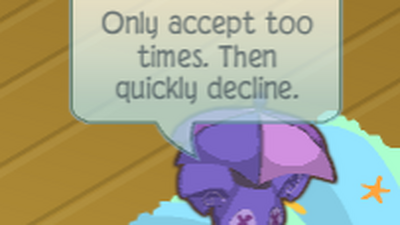 Although Fast Flash scam was prevented when Animal Jam Classic changed trading, it created the Double Accept variant, and is commonly used to scam. As of February 5th, 2020 in Animal Jam Play Wild, it is no longer possible to do either of these two methods as the new trading system has changed...

I went to a giveaway today to see if I could catch any scammers, and I asked the owner (who seemed to be attempting to scam) if they were scamming (“do you need help” sorta message to see what they were up to) and at first I didn’t get a response, but I was able to take a screen of him after everyone left and he said that I was gonna help him before he would “scam big,” I needa crop the photo and find a way to upload it as proof as he doesn’t have a page.

My orange long got scammed by someone named Betajammer523

Which is probably a backup someone made

I'll see if I can dig into this further...

Animal Jam Play Wild has changed the trading system completely, preventing scammers from using the anti-decline scam in said game. Anti-decline is still a thing on Animal Jam PC, which is becoming a common problem for this case. So for this post, i decided to make a difference and how these two has changed over the years.

People, this isn't a post about teaching scammers on these methods. But rather it is an informative post that you should be aware of and how the history has gone through over the years of a near-decade old franchise! You have been warned! Thanks!

Unlike trust scams, this scam is split into two categories: Flash and Anti-Decline. Both Play Wild (Mobile and Steam) and PC has been prone to scammers. Especially when Wildworks started to work on Feral, causing the PC version to be infested with scammers, cheaters, account hijackers and hackers. But this post is about the differences between Flash and Anti-Decline.

As you may know, Animal Jam's most popular feature is trading, which is added on March 31st, 2011, 2 months after seals were released and 1 month after seals became non-member animal. Before trading is added however, members would trade items through jam-a-grams, but quickly became a scamming method where a scammer would never give out a promised item and would simply log off, leaving the victim without the items.

Ever since July 2011, spiked collars became the target for every members alike, being able to be obtained through Forgotten Desert and in March's case Lucky Clovers. However in Play Wild, spiked collars were obtainable sometimes through the treasure hunts for Arctic Wolves, the most popular animal in the entire franchise by people who are looking for fashion and accepted them as domestic dogs.

Over the years, the trading system has been changed for the better or worse. And in these cases, scammers will find a way to steal the valuables such as the retired Headdress and RC Car. An item that is considered a den beta. So for the sake of the informative history, let's get into it.

Like i said, this case is split by two categories: Flash and Anti-Decline. These are the same method: To get the victim into receiving a storebought item in exchange for a valuable by accepting an unfair trade through sneaky ways, leaving the victim with a storebought item such as a Necklace, the cheapest item in the entire PC game. Although this is intended to be a party game as a former Youtube jammer Julian2 has said, it quickly became the second most common scam, only to be beaten by Trust.

Over the years, Animal Jam has tried their hardest to prevent this method from creating more harm to the jammers who are rare and has caused an uproar of many jammers alike whenever a scammer does something harmful. Here's the differences.

Anti-Decline scams has been a problem since the trading system is updated on January 7th 2016. The scammer will often host the giveaway for an item that is a valuable. For example, a scammer will host a red long spiked collar to lure the victims into the scam. Then the scammer will replace the spiked collar with the necklace before saying the following: You have to accept, then accept again and decline in order to win the giveaway. However, when the victim accepts the unfair trade twice for an item such as 3 black long spiked wrists, there is no decline as the scammer claimed. Once the scammer takes the items away, it leaves the victim with the necklace and losing the spiked wrists in the process.

This scam has became a problem and over the years, the Flash and Anti-Decline scams were being pushed around. Animal Jam PC first started to fight against these scams starting in March 2015 by warning jammers that they are trading away a rare or diamond item. However, that doesn't stop scammers from convincing that jammers will ignore these warnings and have their valuables stolen anyway.

When the trading system is updated again on January 7th, 2016, a pop-up box will be displayed, warning jammers if they are sure if they are accepting an item. Although Flash scams have been prevented, it created the method for scammers to take advantage: Anti-Decline. Scammers will use this method instead, as Flash has been prevented from being used on PC and on Play Wild.

In Play Wild's case, there is a theory that the scammer would be using the Flash variant once more on Play Wild, as it is updated on February 5th, 2020 to stop scammers of Play Wild from using Anti-Decline even further. In this method, the scammer and victim will be able to interact each other. My theory is that the scammer will take advantage of this new system by quickly swapping the item that is valuable with an item that is store bought. The victim would not realize they have been duped and the trade has been unfairly accepted. This method of Flash scam might be also hard. since scammers will try to get the victim to accept fast enough. The scammer will also go around with the Anti-Decline method.

Just remember, this is an informative post and just for fun. We do not want scammers to use this as education as scamming is not allowed on Animal Jam.

I have tips for you the next time you see the scammer using these methods.

Long ago, Julian2 invented a party game called Flash, which is originally made just for fun. But scammers took advantage of a scam and turned the party game into a weapon. When the January 7th, 2016 update came along, Flash has turned into Anti-Decline and it has been used as fake giveaways. Do not participate it. Unless the scammer is wailing to lock those who are not participating the giveaways, you cannot participate.

Flash scammers will often swap the valuable item with a storebought or bad item to trick you into getting scammed. So make sure you check twice. If you are REALLY super-suspicious, check about 3 to 5 times to make sure it is the item you want.

Research what item it is!

Just like any other method, make sure you do some research before jumping into conclusions. The items that you see depends on what you want and what you do not want. This comes in handy if you ever stumbled an item that you haven't recognize yet.

Ever since the beginning of Animal Jam Trading, scammers will try their best to hide themselves into actually doing the giveaway. They will range themselves from having spares or helpers assisting the giveaway to hiding their main account and using rigged rounds for spares to take. Check the achivements, animals and even the amount of pets and how many items they are wearing. If you see an account with a few achivements, then it is a spare account or a helper who is assisting the scammer.

Don't call the scammers out!

Nowadays, scammers will often block the jammer who they are calling out for or play the victim card or deny they are scamming to guilt trip the victims. If you are a member, you can jam-a-gram a jammer to warn them about a scam since March 2012. However, non-members won't be able to warn other jammers, as Animal Jam wouldn't allow non-members write a custom message. Back when the custom message is introduced, members tested the messages to make sure if it is suitable for non-members to send it. At the end of the day, it has been abandoned and it is now for members only.

That's all. I wanted to give jammers an informative post that will help them keep an eye on what they are doing. If my theory is correct, Wildworks might need to find a new way to stop scammers other than disabling the trading and gifting systems for 3 days or so. Have a nice day!

So basically once someone said they were hosting a game at their den, so I went, and they would just trade items really fast back and forth. Now, the owner themselves didn't scam, but I traded my heart leggings to a user who didn't trade back and refused to buddy or jag me to get it back. Is this considered flash trading? Cuz in flash trading someone keeps declining super fast til they actually accept. So is this that, or not?