What's on your mind?

Feels nice to have a purpose

Anyway scammer with a ton of evidence but would like a mod to confirm they were scamming just in case (btw I’m autistic so easily manipulated and might make a mistake of some kid, but I’m sure they’re scamming, looks like a spare to me)

They rlly kept trying didn’t they (aka caught in 4K part 3) | FandomYes I am putting this on scammer watch but it’s…play-wild-item-worth.fandom.com 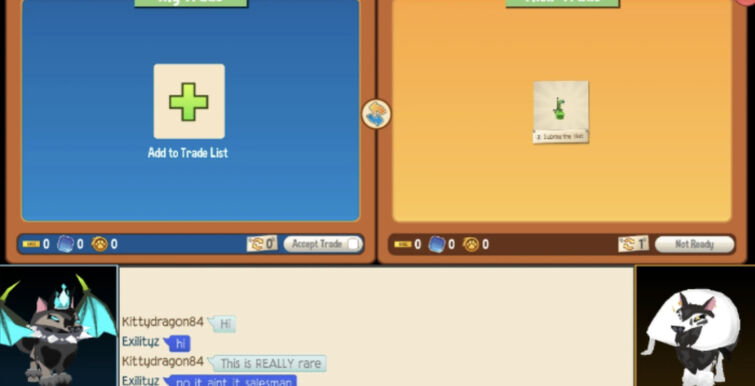 ^ NOT MY IMAGE FOUND ON THE AJPW ITEM WORTH WIKI

The hat is worth nothing as it comes back often, and they are claiming it’s worth a lot (worth manipulation)

So I found someone

Im not 100% sure if they were attempting a scam or just didn’t know worth, but they had a lot of worth so it’s confusing me. They kept saying their liz was worth more and I had to add and I don’t hugely know worth but I’m pretty sure mine was over as it’s pure white (or very close) and theirs was grey 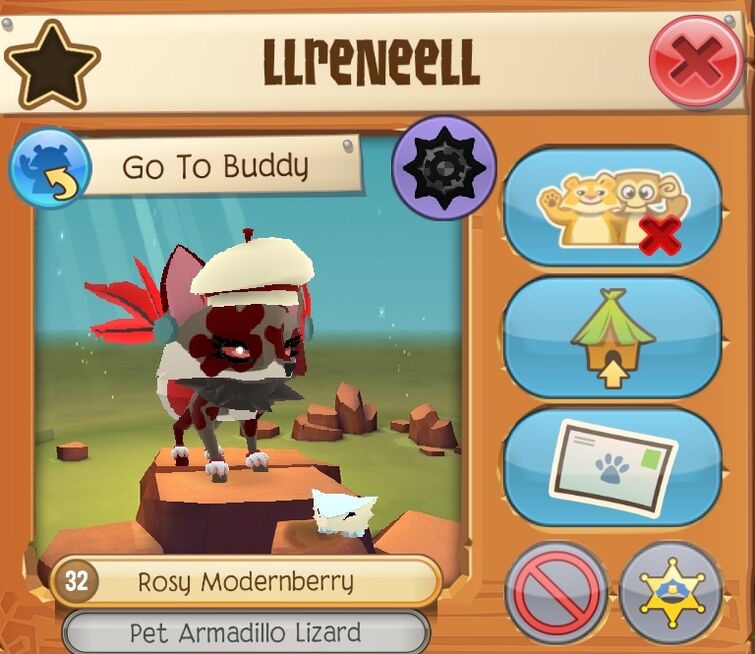 This person randomly came to my den out of all the ppl in jamaa and asked if i would cross trade. They were super rude and guilt tripping so i ended up not trading... I asked them to put on trade and they had some of the items but i realised it wasnt worth it so they called me a liar and that i was salty?? 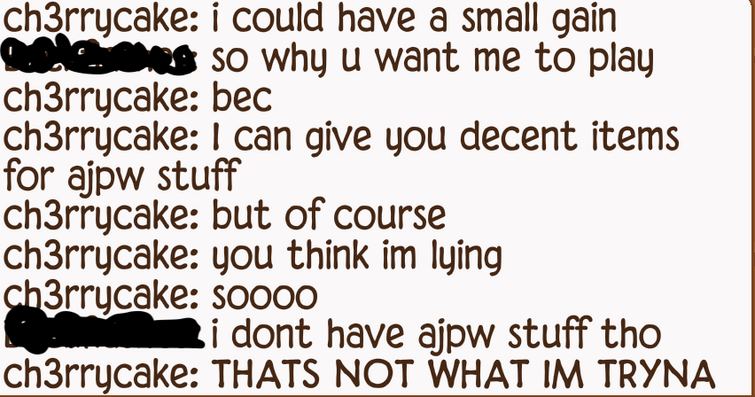 So I was on my backup account and someone came to my den with a New Jammer (i forgot their user) and they were asking me what my main account was. I didn't want to tell them because it seemed suspicious so I said "This is my main account" but they didn't believe me and kept pushing for my main account.

I locked them out of my den and later in the day I logged in to my other backup account. Well guess what? They came to my den with the New Jammer again, and again asked for my main account!

When I asked why, they said "I need more friends, I'll give you a solid if you tell me"

It seemed highly suspicious and I was wondering if anyone thinks this is some kind of hack?

Maybe I'm being paranoid because I was hacked 5 years ago and lost my headdress, spikes, party hat, absolutely everything...

This person confronted me and other jammers and revealed our addresses, names and email addresses.

I really fear for my personal safety and others, so please report this account, and if you can, send Animal Jam an email bringing this to their attention, because something has to be done.

I'm sick of young children being threatened by adults who reveal their personal information, it needs to be stopped!

I uninstalled AJ last year and this got recommended to me.

I just made a page talking about moxxie15 and how hes a scammer but the page is all messed up, can a mod or admin fix it??

If any of you are interested in doing cross-trades, you must be careful and NEVER trade with someone with the user of "xtøxicwølfx".

I quit ajpw quite a while ago so i didnt care if i got scammed there of anything, but i wanted to make sure if this person is safe to trade if anyone else wanted to trade with them as people still do cross-trades even though they are risky. i have obtained proof of his jags(i didn't delete them yet). 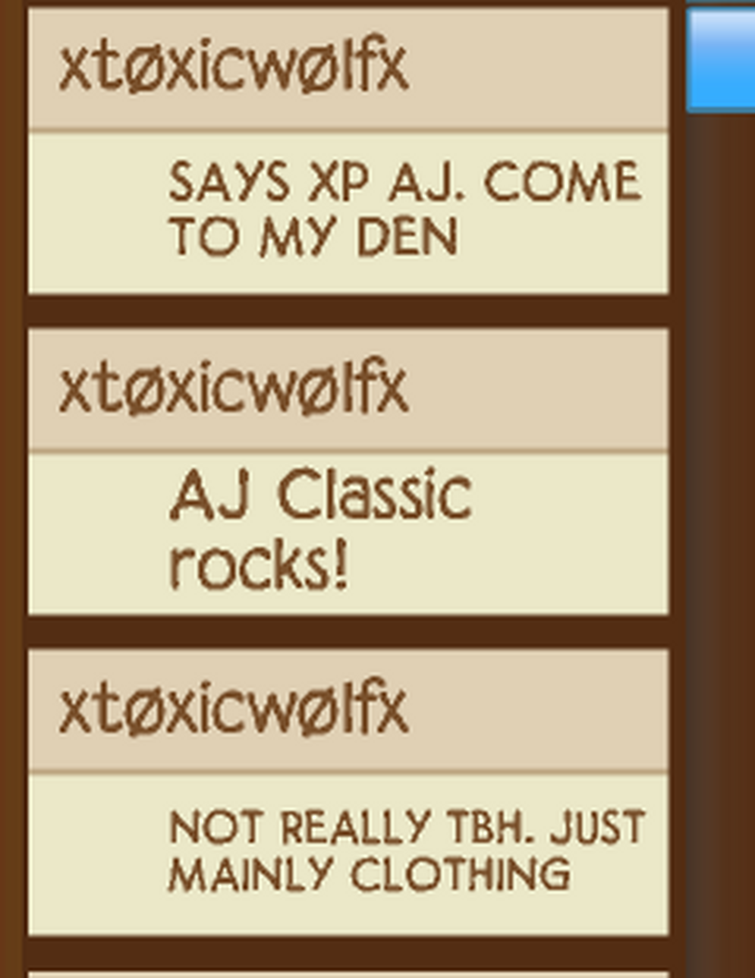 His scamming tactic is basically saying that he wants to do both trades at the same time, so i suggested trading one thing at ajpc, then going to ajpw to trade the promised item and so on. but he insisted on doing it at the same time, it was suspicious. anyway, at the end, i didnt get the promised ajpc item and he only got one item of what he wanted and LITERALLY BLOCKED ME. but i am still in his friend list.

So if you do cross trades, be careful of this dude lol. i could care less about what i lost in ajpw since i quit a while ago but yall guys who do be careful. heres a screenshot ( i couldnt get any screenshots of when i was at his den.) 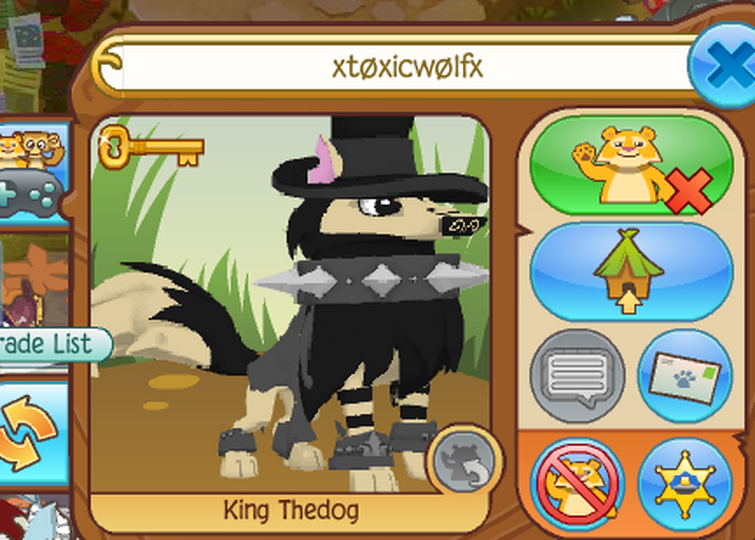 Hello guys, i want to warn you about a suspicious jammer with the username Kidzbop104. 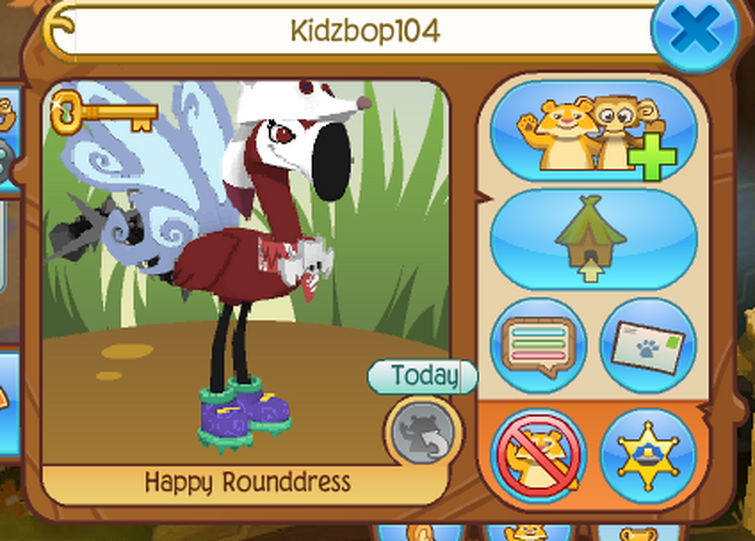 This jammer is going around asking people to gift them "Rare Normal Gingerbeard Wings".

I first outed them in Jamaa Township as scammers because their message said "IF SOMEONE GIFTS RARE GINGERBEARD WINGS I WILL" but the message was never continued, and i never knew what they will gift person back in exchange for the wings they want.

The first thing you'll think when you see someone saying this type of message is to think they are a scammer, right? that's what i thought, after a few more jammers also said they were a scammer, they left the world/server.

However, they sent her a jam-a-gram: 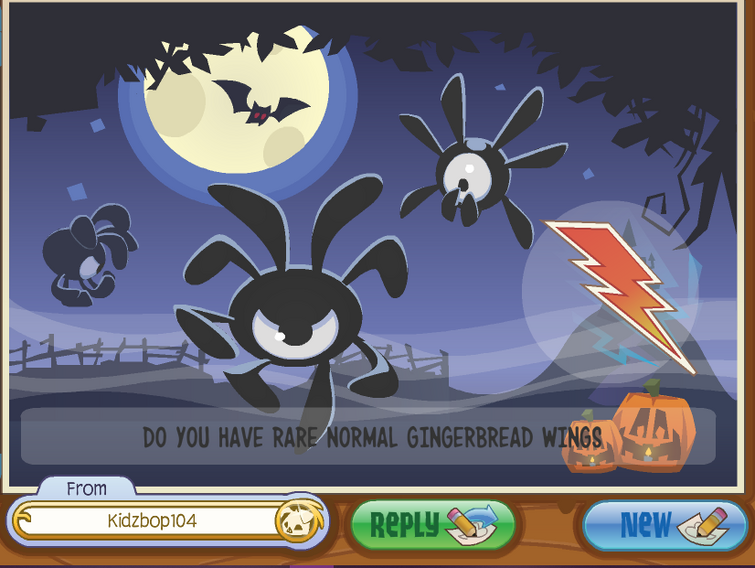 However, after a few jags, they went to my sister's den and asked if they had the wings(still all writing in caps), she said she did so this was their reply: 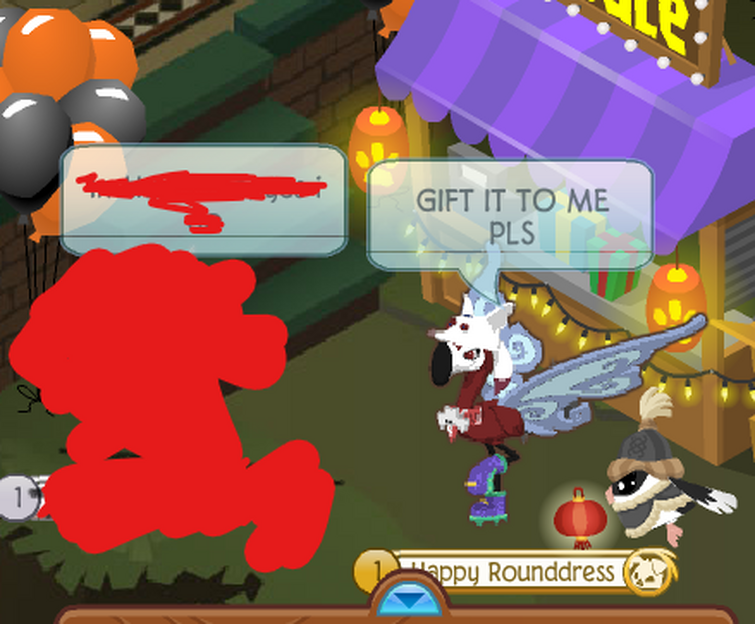 My sister then received undertrades for the gingerbeard wings she had, and logged off when she got uncomfortable with the jammer.

When she logged back on, she found out the suspicious jammer sent her a jag saying "please log back on", we continued with our investigation, my sister followed her to the world she's in and this is what we found them saying in Jamaa: 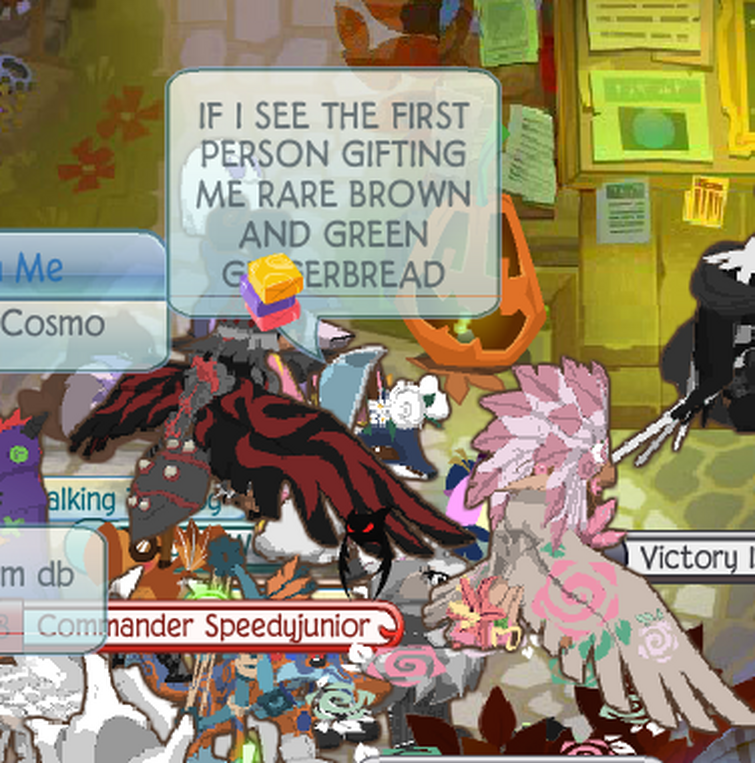 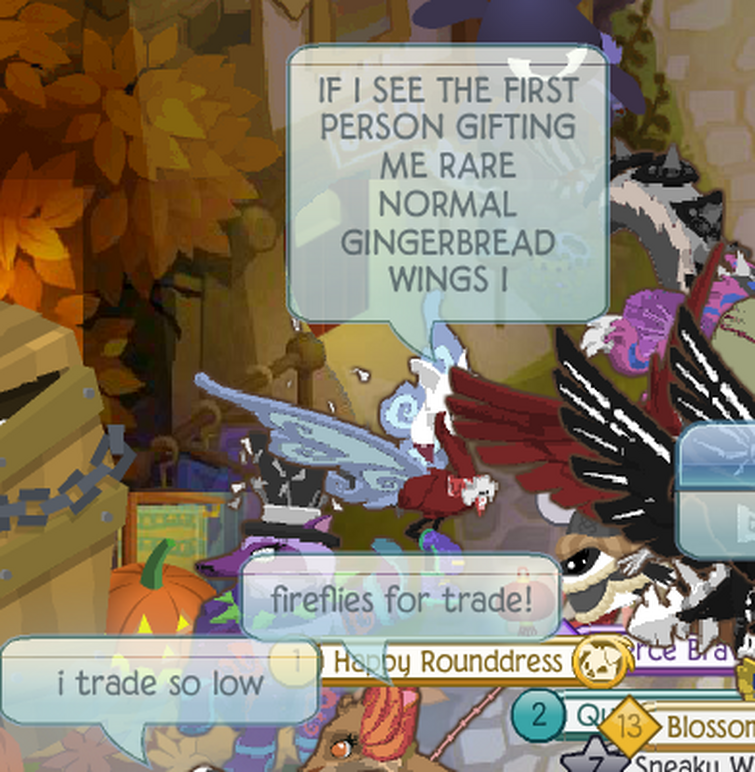 After that, we decided it was enough evidence to use and stopped with our investigation.

I am not saying that this suspcious jammer is a scammer, but they could be one. so please be careful and make sure to not trade your items with anyone else through gifts. 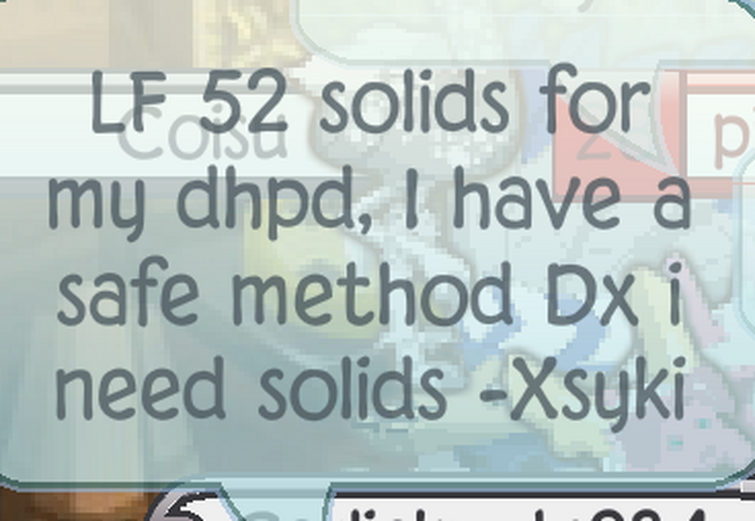 I'm not sure if it was their main but they talked about spares so they could have a lot of different accounts but jeneeeee was doing a "giveaway" and didn't say what they were giving away. Everyone there was saying "sus" and bailing out until jeneeeee started insulting people. I left because it was a waste of time and I saw someone in the main township start yelling, "REPORT JENEE FOR SCAMMING AND BULLYING" so I'm not sure if they scammed people but I thought it was... odd. If this person is a scammer then report them bec they might have done this many times as a joke lol.

Ive decided to resign for a bit because of school + sleep.

So im back. i cant wait to work with (and warn) you guys again. 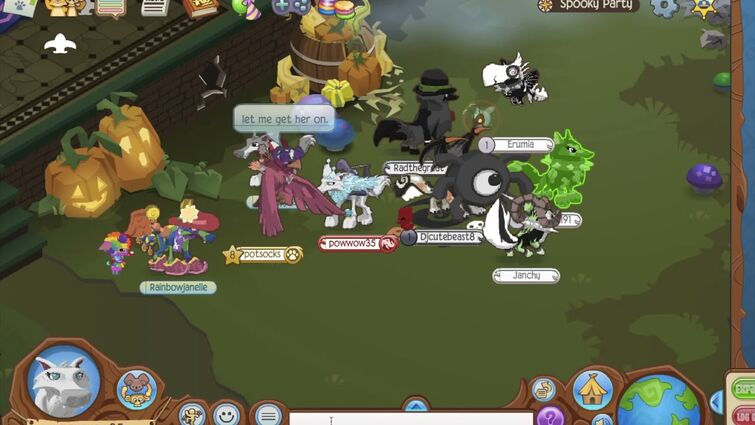 jaeleigha was trying to scam people using the troll trade.

Ran into another person trying this, user: jammer383971

Don't know how this wiki works, but I just got scammed out of my token duck. The username of the scammer is m0nkey90 and they might have my duck in their trade list, since other ducks that might be other "victims" ducks are there. I dont think I can get my duck back, but I just wanted to let others know. I hope this does something. BTW the way they scammed me is pretending to color swap ducks, then taking out their duck last minute, they also added alot of random items most likely to distract from their duck being taken away from the list