Cuteannie19 is an Animal Jam Classic scammer. This user scams by using Item Worth Manipulation.

Cuteannie19 typically jam-a-grams their victim, asking if they have a storebought item for trade. When interacted with, they claimed to be a collector of such items, trying to encourage their victims to do it. After a few minutes of talking, their spare, Secretshark1 enters. They announce that they have the exact same item, and Cuteannie19 offers their valuable item, which is a headdress. The spare quickly declines, mentioning how they hate headdresses and would much rather have a black long Spiked Collar.

This scammer has a reputation for being extremely hostile if the victim doesn't fall for it and also has a reputation for taking advantage of their friends and backstabbing them to steal their items. Cuteannie19 has even said themself that their victims and friends alike mean nothing to them and it's all just a scheme to get items what they exactly want and even claimed Panicin is actually one of their accounts. They do not show proof, but they have mentioned this to many different users. 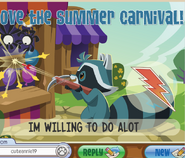