Grapesoda999 uses the Fake Beta Scam. She offers her "beta blanket" for rare spikes, except her variant of the blanket is storebought rather than beta.

Grapesoda999 offered Sabrember the fake blanket for her spike. Sabre realized that Soda was trying to scam, and messaged her on her Jammer Wall. While Sabre and Soda were talking, a nonmember pig (wisteriamoon0115) repeatedly offered Sabre the same fake beta blanket for her rare spike. Sabre asked if the pig was Soda's spare, but she denied it, while insisting that Sabre accept the pig's trade and that the pig had the right blanket. Eventually, Grapesoda999 herself offered the blanket for Sabre's Black Long, but the trade was declined. 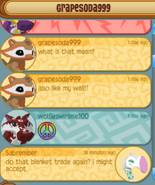 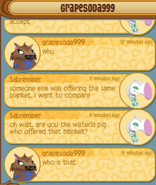 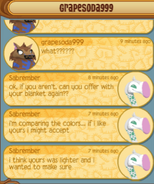