The AJ Scammer Watch Wiki
Register
Don't have an account?
Sign In
Advertisement
in: Scammer, Evidence Provided, My Shop Scammer,
and 5 more

Note: This user was most likely banned, but the page will be up for a little while just in case.

Karika scams by using the My Shop Method. She puts several worthless items in her shop for diamonds, saying that the first to buy from her shop gets a rare item like a Magenta Furry. When someone buys from her shop, she locks the den.

She currently scams using the Cross Trade Method. She scammed her Black Long on AJPC by showing fake proof of a successful crosstrade using a middleman (which is actually her spare or helper).

Karika also may be involved in scamming art commissions.

She has many other users, from lonewolf,loneshadow, and Az3al. She is not banned on her spares and can make more accounts. 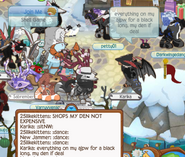 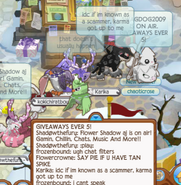