The AJ Scammer Watch Wiki
Register
Don't have an account?
Sign In
Advertisement
in: Scammer, Hacker, Youtuber,
and 7 more

Manedwolfs is an Animal Jam scammer and hacker that uses many forms of scamming including Trust Trading and deception. However this scammer is mainly on Animal Jam Classic. Ironically Manedwolfs is also the one who created this page while evading the bans on certain Wikis.

The scammer hosts a Black Long Spiked Collar giveaway at their den as well as other items, starting with a rigged game like First Jag to gain their victim's trust or justeir spare account, they continue with a Double Accept variant of Flash Trading. They tell their victims to trade their best items for their store bought item on trade, but not to accept. They tell them to accept, then accept again, then quickly decline. However, the scammer can easily accept an overtrade and lock their den, kicking their victims out of the den in the process.

This scammer also hacks people as they hacked Igoesnub and stole a ton of items as well as other valuable items then traded all the items they stole from Igoesnub for a RIM Headdress and Black Long Spiked Collar. Then, they decided to give it to their ex-friend Midxmighty. After Manedwolfs supposedly backstabbed Midxmighty through deception and hacking without even giving the items back and deleting all of the jags and buddies, Midxmighty said they cant be friends if they did not get their rares back and tells their friends not to trust them.

Manedwolfs Changed their Krazy Draws channel name to Minty Draws in the middle of December 2020. It was also recently discovered they have close ties with Straycat2 and leaks jammers personal information to him. Some of the information include Emails, Discord tags, Passwords, Private social media accounts, and more. Manedwolfs also threatened their victims by hacking into the parent dashboards and emails. This is a scare tactic, as this scammer would get their victims to give the items they want out of fear.

On the last days of their account before they got banned, Manedwolfs got into scamming in pairs, usually seen with another scammer named Preposition, who has been rumored to be giving Manedwolfs items of value for helping them out, this isn't proven, but is very likely. This scammer is also known to manipulate their victims into getting scammed by sweet-talking to gain their trust, build up their ego and uses it to their advantage of not only their victims, but also causing alot of drama and making itself look innocent, even if they were banned.

On Animal Jam Play Wild, Manedwolfs hijacked the pack "Baku Bros" by hacking into the owner's account, stole their valuables, and gave Manedwolfs themselves the ownership of it. This scammer also steals art and other people's characters and claims it as their own and will hack any victims there is. They scam at random times. There is a video made by Auth106 that has proof that Manedwolfs is too young to be on social media platforms such as Fandom and Discord, which is provided here

They have a character named "Minty", which is their main look. However, a different animal jam user had a character not in Animal Jam named Nezu. Nezu is in relation to Fluff, the main look of Animal Jam user Springriversong, although Nezu has never been made in Animal Jam. There are many pieces of artwork of Nezu and Fluff together, but none so far have been posted to the public. Some say the creator of Nezu met Springriversong over a site called Quotev. Nezu has been known to have the display name on said site as "Nezu Fox". Before you go talking about how nice Manedwolf's main look is, please make sure to find Nezu and let them know their character design is nice.

Trying to give a renewable membership account. Can hack and scam using this method. 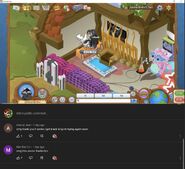