This scammer needs more information such as the way they act. If you ever see them again, please report it with images of the scammer acting strange.

w0lfoo scams by hosting Double Accept Flash giveaways and by Gifting Wars on Animal Jam Classic. They have a youtube channel called Salty Rat, they have a friend, their channel is called W0lfowoo AJ. The previous channel name to W0lfowoo AJ was Extraterrestrial Howls in which they and their friend uploaded scamming videos

They claim to never use Trust, much preferring the Double Accept method of scamming. It's also noted that Ohhellotherehuman claims to have been banned multiple times before, but continues to swap accounts and stores their valuable items on a secret account. It is also suspected this account is being used by more than one player. 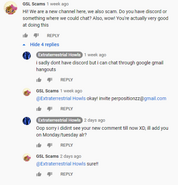