Sharkysplashes is banned, but she may be scamming on other accounts.

She helps/hosts giveaway scams with other accounts such as Raindxrops. On her Disneydreamss account, she hosted a 'quitting giveaway' where people would give her items of high worth in exchange for items of higher worth. She had a lot of spare/buddy accounts give her items, and it looked like she gave those accounts Headdresses and Black Longs back.

Her method to hack people is implemented via Discord, using an extension called "EditThisCookie". She will get people to fall for her trick by saying "If you want free items go to my den". People will ask if it's trust, and she will respond that her "friend" is the one who will give the free items instead.

When you contact her, she will ask what 4 or more of your dream items are. She then tells you to install the extension (EditThisCookie). When you finish, she asks for a code called "_SessionID". This code gives her access to your Animal Jam account. While she does all of this, she will make her spare (Disneydreamss) supposedly get their dream items, saying things like "OMG, LOOK AT MY TRADE LIST, I THOUGHT IT WAS A SCAM!"

On Raindxrops she scams using Flash Trading (accept, accept, decline). She makes it seem like there are 3 steps to accepting a trade, and tells people to offer their good items for her bad items without accepting--just accepting twice, then declining. However, she can easily accept an overtrade. 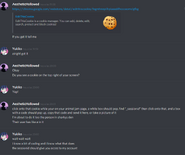