Shmiigy is an Animal Jam Classic hacker that dates back as far as 2012. He was known for using multiple hacking methods to scam people's items. These methods include Language Server Hack, Item Generator Hacks, the Free Account Hack, and the Session ID Hack. Around 2014 he buddied a person named jmpwfhjsbggft38. This person was particularly interested in the way Shmiigy hacked people. After some months they began to chat on Discord, and even sent each other selfies and memes.This is when Shmiigy got the idea to start a hacking group, although he kept that taught to himself when teaching jmpwfhjsbggft38 how to scam people.

During 2016 Scralkx has already reached 500 subscribers, and Shmiigy's Instagram page which was renamed to Scralkx, and at the time had 1k followers. This is when Shmiigy asked jmpwfhjsbggft38 to change their name to Tpnfuijoh in order to be more recognizable and memorable to the general public who were watching their videos. Shmiigy and Tpnfuijoh would often record themselves hosting giveaways where they planned to Double Accept Flash someone. In order to prove Shmiigy's trustworthiness, Tpnfuijoh would act as a contestant during these giveaways and double accept with Shmiigy to prove that he wouldn't scam them. The two woud trust each other with various rare items, like Fox Hats, Worn Blankets, den betas and various Spiked Collars. However, during one fake giveaway, Tpnfuijoh refused to trade back the item that was traded to him. After this, Tpnfuijoh took full control of Shmiigy's account through a new method he developed on his own, called Brute Force Hacking.

Unbeknownst to Shmiigy, during their private chats on Discord, Tpnfuijoh would send pictures for Shmiigy to use on his Instagram account. The images would have to be downloaded, and when they were they also installed a .exe file that would run when the user turned on their computer. Next, Tpnfuijoh promised to give back Shmiigy's Spiked Collar back if he downloaded and tested Tpnfuijoh's Item Generator. When he did, it downloaded a Terminate And Stay Resident Virus (TSR) to Shmiigy's computer, and used the invisible .exe file as a host to run the virus. The virus then began to run multiple instances of Animal Jam inside an isolated operating environment, in an attempt to guess Shmiigy's password by using an incorporated Python script.

Qbdibdbnbd has also been suspected of hacking other members of the Scralkx group and using their accounts to hack and scam others. Qbdibdbnbd and Shmiigy are known to share hacked accounts, so Shmiigy might still be active on another account. 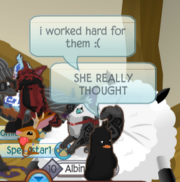