Something is an Animal Jam Classic scammer who usually utilizes fake giveaways and hacking to scam their victims. They use multiple methods such as Trust Trading, and Fake Giveaway Scam, and are known for using Brute Force Hacking to steal passwords from unsuspecting victims. This scammer has been reported to have said that the specific coding language they use to create their scripts is Python. Their hacking begins by targeting a specific victim, and generating many passwords to try and login with their account. Once succeeded, they then would gift the victim's items to themself. For this reason, they only target members.

There is one exception to this. Another hacker by the name of Shmiigy has also admitted to helping Something hack into accounts and the two of them would often share their hacked items. This was the case until Something betrayed Shmiigy by promising to give them a black long Spiked Collar. It is also known to have done the same thing to many of their victims that used to be friends with them.

Something is also known for using the account they hacked into as spares. If one account gets banned they would move to the next. It is rarely seen on their main account. They also used to run a Instagram Page that claimed to generate free Spiked Collars and Headdresses, but it would instead download a Memory-Resident Virus onto the victim's computer, that would then proceed to run their alleged python script so they could generate as many passwords at once without having to use too much of their own RAM.

Although multiple victims have claimed on various Discord servers that Something's Instagram Page was real, it is impossible to prove since Something's Instagram Account has been entirely deleted over 4 years ago. Despite this, Something still has full control over the many accounts they have hacked, and is still a active hacker, although their progress has slowed since then.

It has also been suspected that they refer to the accounts they hacked as a group called Black Stars when their Instagram account was active. These accounts are often used during their Fake Giveaways where they use the Black Stars as their minions to make their den seem more populated then it really is. They would then lure a victim to their den where they would coerce them into Trust Trading. During 2018, this was their primary way of scamming.

Although a talented hacker, Something was hacked itself more than once during 2019, this time by a person who calls themselves Hacker Hacker. This scammer is known for hacking the hackers of various online games, such as Animal Jam, Wizard 101, Growtopia, Habbo Hotel and many more. Although focusing mostly on Kids MMO's due to having the least secure netcode, They originated from Maplestory. Hacker Hacker runs a blog on the Dark Web where they post about various methods of hacking, as well as posting about the hackers that they hacked. Hacker Hacker has never been reported of stealing any virtual items. they mostly hack other hackers for the fun of it.

They used the same Brute Force technique as Something. Although they might have control over Something's account, Something has still been seen scamming victims the same way they used to, so it is uncertain on whether or not Something hacked into their own account or not. Some of Something's victims who claim to have been hacked have said that their scamming behavior seem to be highly inconsistent, so it is suspected Something and Hacker Hacker both have control over this account and constantly fighting over it. Hacker Hacker's blog is impossible to access without Tor Browser so very few jammers have seen it. Based on the blog's activity Hacker Hacker seems to be quite active on Animal Jam Classic, although it is unknown what their main account is, or if they even have one.

Despite this, it is still deemed unsafe to go near Something, as there is no way of knowing who is controlling the account. 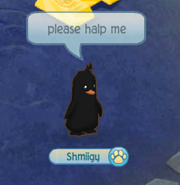