The AJ Scammer Watch Wiki
Register
Don't have an account?
Sign In
Advertisement
in: Multiple Suspected Accounts, Scammer, Item Worth Scammer,
and 3 more

Teejayx6 uses the Item Worth Scam. They work with another jammer (possibly an alternate account) named Greyson192, targeting someone with a lot of rares. Teejayx6 jags the victim, asking if they'll trade Tin Foil Antlers for a list full of rare items like Spikes and Headdresses.

Soon after, Greyson192 jags the victim saying they have Tin Foil Antlers. Greyson claims that the antlers are worth a lot. The victim trades their rares to Greyson, thinking that they'll get Teejayx6's even better rares for their newly acquired Tin Foil Antlers. However, Teejayx6 blocks the victim, leaving them with worthless antlers. 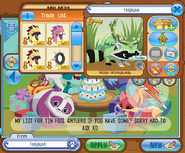 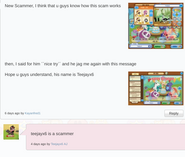 Teejayx6 saying they're going to change their username

Claiming that they're a scammer
Community content is available under CC-BY-SA unless otherwise noted.
Advertisement