One of Unciel's methods is to go to a highly populated server, and advertise a giveaway. Most of the times being for smaller long Spiked Collars to a black long Spiked Collar. After Unciel collects around 25-28 victims, they introduce the scam. First to gain their trust they give away a smaller item, such as a clothing beta, then stall for a few minutes to get to know their victims. Then introduces the Double Accept variant of Flash Trading they claim they will be timing them and the fastest trade within a 10 minute-timer will win the Spiked Collar. Unciel often has 2-3 helpers.

Another one of their methods is Gifting Wars through the same method, this time they would claim if victims gifted you an item they would win Unciel's trading list. If a victim gifts something small they will either tell them down by saying it's boring or claim they can't get them to send a black long Spiked Collar, thus encouraging the victim to send over their valuable items. Once Unciel gets everything out of the victim and what they wanted, they will make an excuse, claiming they have to go eat dinner or walk their dog and that they will send them the prize once they come back. However, Unciel logs on late at night and transfers the items they stole to a spare and later send it to their main account after 1-2 days.

Unciel is also known to be a very manipulative individual. During their scams, whether it be Gift Wars or Double Accept, they will make promises and remarks to push the victim into getting scammed more until they run out of the items they have. Unciel also doxxed Manedwolfs and a player named Dragonsxflower. Because of this, Unciel been going around scamming other victims and stealing their personal information on Discord ever since.

On discord, Unciel does a job of making sure to collect as much personal information as they can on their victim. Whether they do anything with said information is dependent on who they are. They will make sure to be the owner of every group text made or find their way into having part ownership over servers. Unciel also pretends to care for their victim in return for items, such as when they were close with a player named Iceatiel, they comforted them in ways to where they felt at guilt for not returning the favor. Unciel tries their best to get valuable Animal Jam Classic items out of their discord victims, such as a Headdress they wanted to manipulate Iceatiel into giving them.

Unciel also phished a large discord server, he DM'd the owner a phishing link that stole their discord password and other personal info. 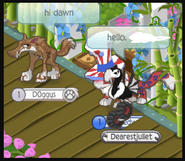 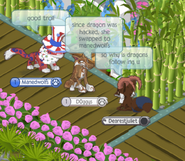